5 things to know before the stock market opens Wednesday

Here are the most important news items that investors need to start their trading day:

We’re two trading days into October, and we’ve already had two stunning stock market rallies. For the S&P 500, it was the best two days combined since March 2020, when the world was just starting to come to grips with the Covid pandemic. It’s quite the turnaround after September’s market rout, and as investors prepare for another round of big rate increases from the Federal Reserve. Companies start reporting third quarter earnings in earnest next week, as well. The rally is poised to run out of steam, at least for a morning. Futures were down across the board before trading opened Wednesday. Follow live market updates here.

Ok, so we have a deal. Again. Probably. Elon Musk, the world’s richest person and the CEO of electric-vehicle leader Tesla, said he would agree to buy Twitter, after all, according to a regulatory filing. Earlier this year, he offered $54.20 a share for the social media company. Then he tried to back out of the deal, making allegations about the number of “bots” on the platform, and Twitter sued him to complete the transaction. The case is set to go to trial Oct. 17 in Delaware Chancery Court. The news Tuesday came after several text messages between Musk and allies were published as part of the legal fight, and after critics hammered Musk over recent tweets about Ukraine and Russia. But now the two sides could seal a deal as soon as Friday, sources told CNBC. “The intention of the Company is to close the transaction at $54.20 per share,” Twitter said Tuesday. Twitter shares jumped more than 20% after being halted for a big chunk of Tuesday.

If you think there are too many streaming services, streaming companies may well agree. Several are already bundling their own services together, like Disney is doing with Hulu, ESPN+ and Disney+. NBCUniversal’s Peacock has sought to go even bigger by looking to team with competitors. Executives at the company discussed potential larger bundles with HBO+ and Paramount+, but were met with resistence, sources told CNBC. Peacock also has had talks with smaller services such as AMC and Starz about potential partnerships, too, although those discussions haven’t yielded any progress, either, sources said. But while nothing is moving toward a big bundle at the moment, some industry insiders think it’ll happen eventually. “The question becomes what catalyzes it to happen,” Tom Rogers, former president of NBC Cable and current executive chairman of Engine Media, told CNBC.

Ukrainian soldiers adjust their national flag atop a personnel armored carrier on a road near Lyman, in the Donetsk region, on Oct. 4, 2022.

Ukrainian forces are moving closer to the Luhansk region, one of the four areas of Ukraine that Russia claimed to annex in recent days, and Russian leaders are likely worried, according to the UK Defense Ministry. The moves make it increasingly likely that Ukraine’s military can strike an important road with artillery, the ministry added, noting that it would further strain “Russia’s ability to resupply its units in the east.” Elsewhere, Ukraine President Volodomyr Zelenskyy touted more “good news from the front lines,” saying his forces have made significant gains in the country’s south. Read live Ukraine war updates here. 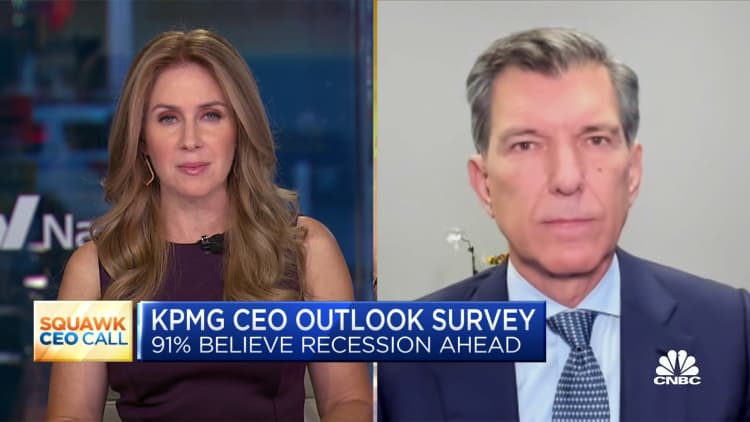 Business leaders around the world expect a recession to hit the global economy within the next 12 months, according to new survey findings from KMPG. Many of them project it to be a “mild and short” slowdown, and they see more growth prospects emerging in the near future, however. “CEOs worldwide are displaying greater confidence, grit and tenacity in riding out the short-term economic impacts to their businesses as seen in their rising confidence in the global economy and their optimism over a three-year horizon,” said Ong Pang Thye, a managing partner for KPMG Singapore.

And one more thing …

The American League has a new single-season home run champion. Aaron Judge hit his 62nd dinger of the season Tuesday night in Texas, putting him atop fellow New York Yankees Roger Maris (61 in 1961) and Babe Ruth (60 in 1927).

Disclosure: Comcast’s NBCUniversal is also the parent company of CNBC.