A novel PLpro inhibitor as a broad-spectrum anti-coronavirus agent

The coronavirus disease 2019 (COVID-19) has frustrated many healthcare workers during the early pandemic not just because of its high transmission rate but because of the lack of effective treatments against severe acute respiratory syndrome coronavirus 2 (SARS-CoV-2), the causative agent. At this point in the pandemic, the only treatment options for individuals with severe COVID-19 included supplemental oxygen or invasive mechanical ventilation.

In a recent Protein & Cell study, researchers from the University of Hong Kong identify a potentially effective compound against COVID-19.

The initial screen consisted of 50,080 drug-like compounds in 384-well plates. With a cut-off level of 40% inhibitory activity towards PLpro, 54 primary hits were discovered.

A series of confirmatory and secondary assays were then used to exclude potential sources of interference, such as 7-Amino-4-methylcoumarin (AMC) fluorescence, followed by dose-dependent validation experiments against PLpro from both SARS-CoV-2 and its close relative Middle Eastern Respiratory Syndrome Coronavirus (MERS-CoV).

Three compounds against SARS-CoV-2 were of particular interest, all of which were included in the same class of 5-oxo-1-thioxo-4,5-dihydro[1,3]thiazolo[3,4-a]quinazoline-3-carboxamides. These were named FO213, FO326, and FO393 and exhibited inhibitory concentrations of 50% (IC50s) of 7.4, 8.2, and 15.8, umol/L respectively, and inhibited MERS-ProPL with IC50 between 10 and 20umol/L. Another compound, GRL0617, was effective against SARS-ProPL but was found to be ineffective against the MERS-CoV-2 variant. 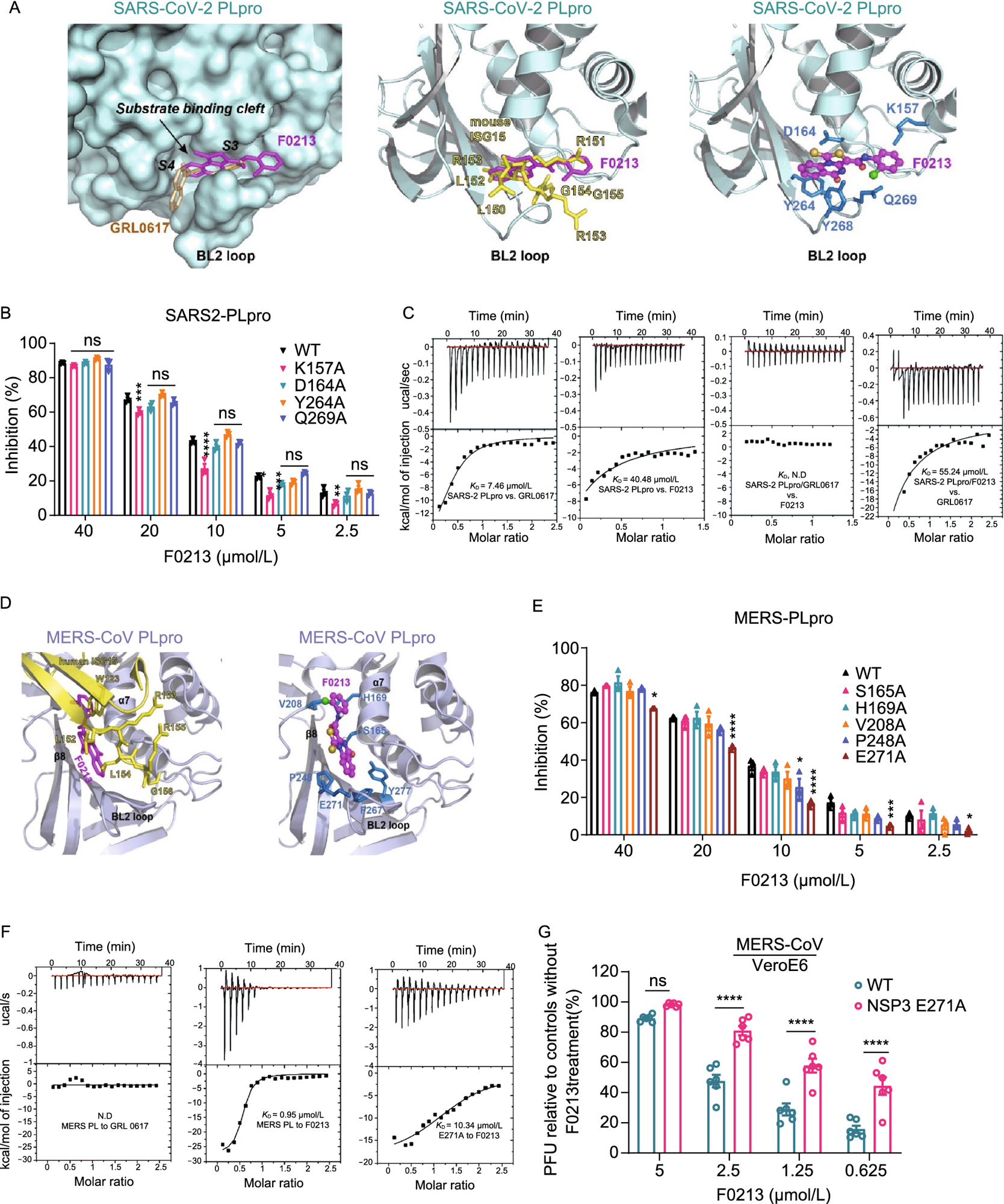 Efficacy of PLpro inhibitors against SARS-CoV-2 and MERS

The antiviral efficacy of FO213 against SARS-CoV-2 variants of concern (VOCs) was assessed by plaque reduction assays using the Alpha, Beta, Delta, and Omicron variants. To this end, FO213 successfully suppressed the replication of all variants in a dose-dependent manner.

For a more mechanistic investigation of FO213, PLpro cleaving activity against ubiquitin-AMC and ISG15-AMC substrates were titrated against different concentrations of FO213. MERS-PLpro tended to show higher sensitivity than the SARS-CoV-2 version; however, the compound remained effective.

Human deubiquitinating enzymes, which are those that are attacked by PLpro, were isolated from cellular lysates and modified by an HA-Ub vinyl sulfone probe in the presence and absence of FO213. to allow for Western blot analysis with an antiHA antibody to reveal any modifications. However, treatment with a positive control inhibitor diminished the modification to the extent where no change was measured upon FO213 treatment.

When PLpro was added to the lysate, the modification did occur; however, this was also immediately eliminated if FO213 was present, thus suggesting that FO213 is a specific SARS-2PLpro deubiquitinating inhibitor. Further exploration against multiple other cellular proteases confirmed this observation.

Efficacy of FO213 in vivo

In animal trials, golden Syrian hamsters were given either oral or intraperitoneally administration of 5 mg/kg of FO213, with the first dose given six hours after infection and then daily for the next three days. Viral loads peaked on day four; however, FO213 successfully decreased plaque-forming units in lung tissues by between 1 and 2 log. A similar degree of suppression was seen in the lungs of treated hamsters.

Knock-in mice with a lethal human dipeptidyl peptidase were then challenged with 2,000 plaque-forming units (PFU) of mouse-adapted MERS-CoV, followed by intraperitoneal delivery of FO213. FO213-treated mice had a significantly higher survival rate at 40% as compared to 0% and suffered a much lower reduction in body weight loss than the non-treated mice.

The authors successfully identified several effective anti-SARS-CoV-2 compounds from a massive library, confirmed their efficacy in cell studies, determined a likely mechanism of action which allows this compound to be effective, and confirmed that FO213 is effective against COVID-19 in vivo. Taken together, the current study findings support the future use of this compound in clinical trials.