A recent review paper, published in the MDPI’s specialized journal COVID, highlights key features of the Omicron variant of the severe acute respiratory syndrome coronavirus 2 (SARS-CoV-2) – and examines the potential and roadblocks in using renewable marine resources in the fight against the coronavirus disease 2019 (COVID-19).

Of all the SARS-CoV-2 variants, the most recent one, known as Omicron, harbors the most significant number of mutations that give the viral particles an improved ability to infect and transmit between hosts, as well as to avoid immune protection (either following the infection or after vaccination).

Akin to other strains, the Omicron SARS-CoV-2 variant gains access to the human cells by using the receptor-binding domain (RBD) of the spike glycoprotein to connect with the cell receptor angiotensin-converting enzyme 2 (ACE2). This is the pathway that holds the most promise for drug development.

But new therapeutics against COVID-19 are just starting to enter the market, with many still in the preclinical development phases. Marine resources have significant activity against cancerous cells, viruses and bacteria; therefore, their ability to halt or treat Omicron viral infection is a promising research avenue to pursue.

More specifically, marine resources that can be isolated from invertebrates and cultivated under farming conditions (such as sponges) are highly advantageous over synthetic compounds as they are environmentally friendly, metabolically compatible and contain little (or no) toxins.

In this short (but comprehensive) overview, Dr. Sarah Geahchan, Dr. Herman Ehrlich and Dr. Azizur Rahman (all of them affiliated with the University of Toronto in Canada) have summarized key studies and reports exploring the SARS-CoV-2 Omicron variant in the context of marine resources.

A comparison of few key missense mutations in the spike protein of previous SARS-CoV-2 variants and the omicron variant. As seen in the image on the left, previous variants (i.e., delta variant) had few mutations that favored viral infection. Seen on the right, omicron has more mutations, many of which function to increase binding affinity to host ACE-2 receptor and potentially increase infectivity ability as well as transmissibility of viral particles. Some mutations such as T478K overlap with previous variants, and some (i.e., E484A) are unique to omicron. (Created with BioRender.com (accessed on 19 December 2021)).

The propensity of marine compounds to inhibit and interfere with several stages of the viral life cycle makes them more advantageous when compared to current drugs (such as remdesivir). Targeting conserved enzymes like RNA-dependent RNA polymerase of the virus (RdRp) and main protease and conserved regions on the RBD are promising venues for tackling emerging viral variants.

One notable example are compounds such as inorganic polyphosphate and natural bromotyrosines that have been shown to contain multiple mechanisms of action against SARS-CoV-2 and other viruses. In addition, metabolites produced by marine organisms may prevent viral entry, viral replication and protein synthesis, thus completely halting the viral life cycle.

Furthermore, lambda-carrageenan is a polysaccharide found in red algae that can inhibit influenza virus and SARS-CoV-2 viral replication in a dose-dependent fashion. Studies have shown how lambda-carrageenan is able to halt viral entry and viral protein synthesis, primarily by blocking the transcription and translation of proteins. 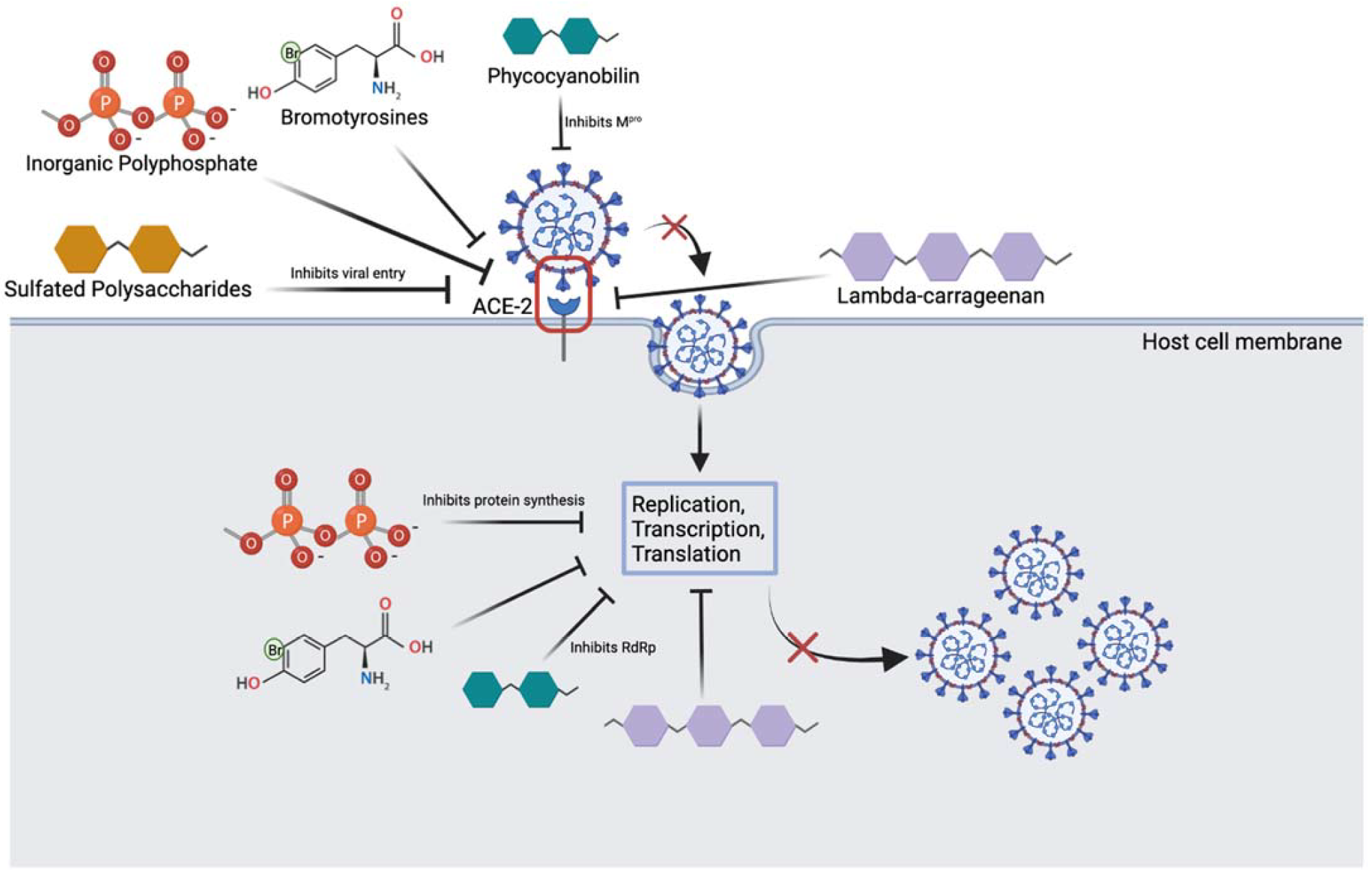 Overview of marine compounds interfering with the SARS-CoV-2 viral life cycle. Image depicts several marine substances that can inhibit various steps of the life cycle which may be relevant to treatment.

And then, there is a recent study that pinpointed natural bioactive compounds in a plethora of marine seaweed species as potent inhibitors of the Omicron SARS-CoV-2 variant. Molecular docking analysis revealed two compounds – phloretin and caffeic acid hexoside – that have the power to inhibit important residues critical for the interaction of the virus with the cell receptor.

Taking everything into account, it is relatively clear that various seaweed compounds and metabolites found in other marine organisms may be rather effective against the infection with the Omicron variant, pending future experimental studies for steadfast evidence on this.

Of course, the potential development of drugs from marine resources is not without several notable challenges. First, even though the small scale is environmentally friendly, as we have mentioned before, large-scale production and continuous supply of resources may have an inverse effect and actually harm the ecosystem.

Moreover, most research studies that used marine resources for COVID-19 and other viral agents have been conducted in vitro, but we lack data on their in vivo efficacy and safety studies, let alone clinical trials that would confirm their actual antiviral activity.

And even if these studies start now, they are very time-consuming, which means the benefits of applying these drugs to current SARS-CoV-2 variants are rather limited. Still, that should not prevent the development process, considering the potential emergence of novel variants (or even novel coronaviruses).

Even though a substantial amount of knowledge has been accumulated on how the SARS-CoV-2 Omicron variant differs from other variants, many question marks still have to be answered before we can introduce new compounds based on marine resources. There is also an additional concern regarding the potential emergence of other viral strains as well.

“The development of natural compounds from marine resources proves advantageous against the evolving SARS-CoV-2 variants due to their multifaceted mechanisms of action and their promising in vitro results”, say study authors in this paper published in the journal COVID.

“Developing compounds that target RdRp and main protease of the virus, as well as conserved residues in the RBD important for binding the ACE-2 receptor is where the focus of drug development should be”, they additionally emphasize.

In any case, it is clear that booster vaccine doses are rather beneficial in our fight against the SARS-CoV-2 Omicron variant, but several studies have shown that the evolving virus may escape the host immune response. This consequently opens the door for using different compounds found in marine life to our advantage.