Scientists have developed several pharmaceutical and non-pharmaceutical interventions to contain the current coronavirus disease 2019 (COVID-19) pandemic, which is caused by the rapid outbreak of the severe acute respiratory syndrome coronavirus 2 (SARS-CoV-2). For example, the rapid development of COVID-19 vaccines has been instrumental in the prevention of severe illness and deaths worldwide.

In Africa, owing to poor vaccination coverage, the intensity of severe infection and death due to SARS-CoV-2 infection remains high. Additionally, the emergence of new SARS-CoV-2 variants has reduced the efficacy of available vaccines and therapeutics, which are based on the spike protein of the original virus. The World Health Organization (WHO) has classified these SARS-CoV-2 variants as variants of concern (VOC) and variants of interest (VOI).

The effect of COVID-19 in patients with human immunodeficiency virus (HIV) is not clear. In one study based on small sample size, researchers report that people living with HIV (PLWH) exhibited similar COVID-19 outcomes compared to healthy individuals.

However, a larger epidemiological study has contradicted the previous report and identified increased hospitalization and death rates due to COVID-19 among PLWH as compared to HIV-negative individuals.

One previous study revealed that prolonged shedding of high titers SARS-CoV-2 and the emergence of many mutations were found in individuals with advanced HIV and antiretroviral treatment (ART) failure. Scientists have stated that both B-cells and T-cells play important roles in providing protection against SARS-CoV-2 infection.

Interestingly, studies have shown that T-cell responses can offer protection even in the absence of humoral responses. This implies that in an individual with inherited B-cell deficiencies or hematological malignancies, T-cells will play an important role in their recovery from SARS-Cov-2 infection.

Previous reports have indicated that COVID-19 severity is related to a weak SARS-CoV-2-specific CD4⁺ T-cell polyfunctionality potential. Several studies have also shown that messenger ribonucleic acid (mRNA) vaccines can stimulate Th1 and Th2 CD4+ T-cell responses, which can be correlated with post-boost CD8+ T-cell responses and neutralizing antibodies. Thus, scientists have expressed the need for more insights regarding T-cell-mediated protection against SARS-CoV-2 infection.

In sub-Saharan Africa, the prevalence of HIV is high; thus, it is important to determine the effect of HIV in individuals diagnosed with COVID-19. Understanding the disease outcome in this patient population will help researchers and policymakers formulate effective strategies to protect them from SARS-CoV-2 infection.

A new study posted to the medRxiv* preprint server evaluates the impact of HIV infection on the quality and epitope specificity of SARS-CoV-2 T-cell responses during the first and second waves of COVID-19 in South Africa. In this study, scientists investigated the antigen-specific CD4+ and CD8+ T-cell responses in a cohort of SARS-CoV-2- infected individuals with and without HIV infection. 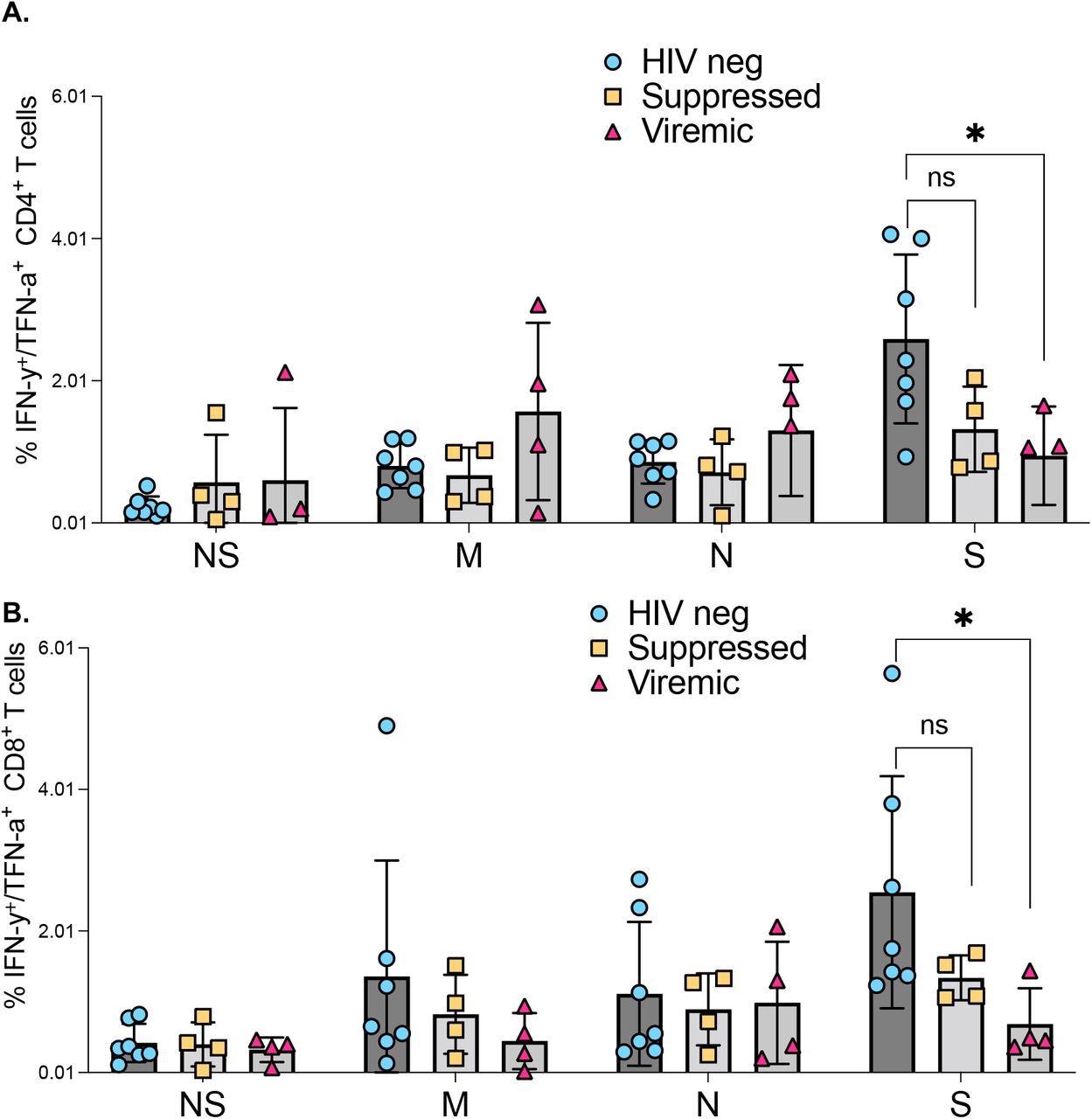 Comparison of SARS-CoV-2 protein targeting by T cell responses among HIV negatives, suppressed and viremic donors: The magnitude of (a) CD4+ T and (b) CD8+ T cell responses targeting SARS-CoV-2 proteins among study groups. P-values for differences among the groups are *<0.05; as determined by the Mann-Whitney U test. (GraphPad Prism version 9.3.0)

HIV-seronegative individuals exhibited robust CD4+ and CD8+ T-cell responses against the SARS-CoV-2 spike protein compared to the PLWH. Furthermore, reduced T-cell cross-recognition was observed between the two COVID-19 waves, which was more prominent in people with unsuppressed HIV infection. 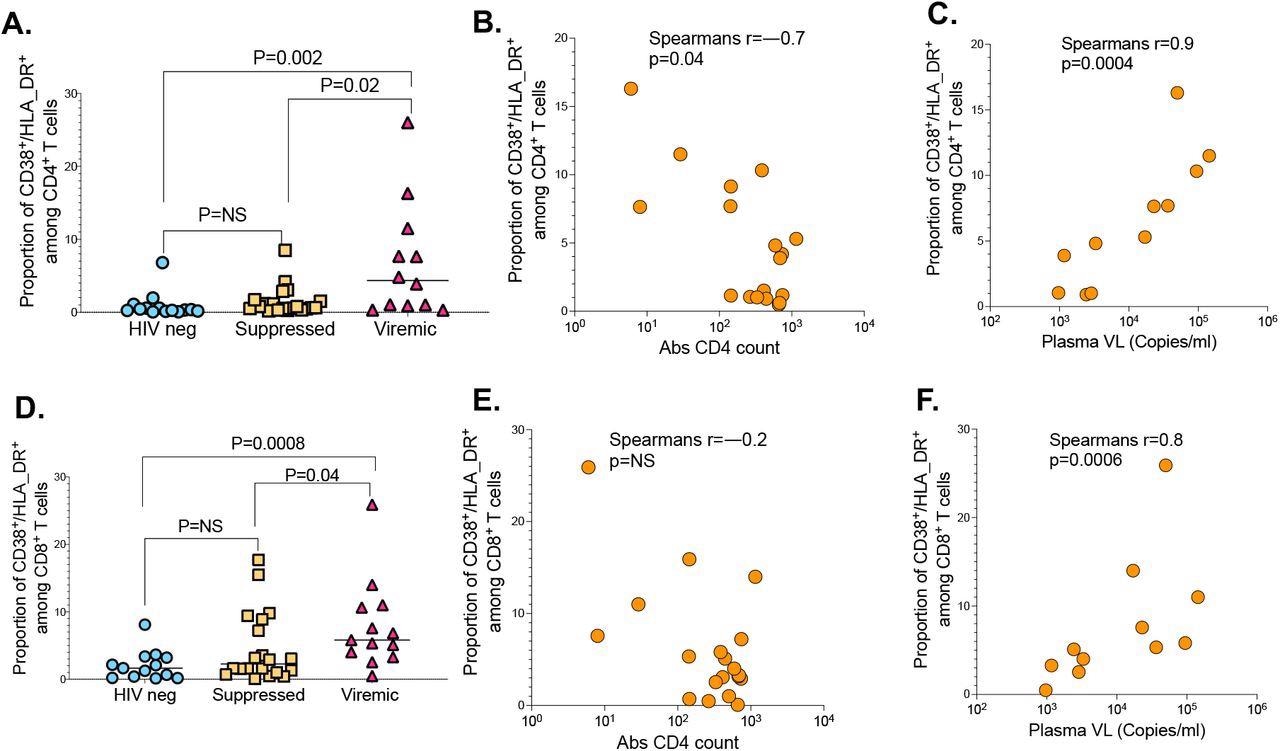 medRxiv publishes preliminary scientific reports that are not peer-reviewed and, therefore, should not be regarded as conclusive, guide clinical practice/health-related behavior, or treated as established information.