What Are Woody Allen, Johnny Depp and Gerard Depardieu Doing...

Woody Allen, Gerard Depardieu and Johnny Depp all walk into a restaurant.

That’s not the beginning of a bad joke — the three controversial men are looming over a favorite eatery in the South of France, and have been for years.

La Pizza Cresci, a famous spot frequented for decades by Hollywood players who have visited the Cannes Film Festival, has immortalized the trio in a large mural of cinema legends.

The portrait is on the restaurant’s second floor, opposite sweeping views of the French Riviera. As guests snack on plates of pasta and creamy burrata, they can’t help but make eye contact with an illustrated Allen (who was accused of rape by his then 7-year-old adoptive daughter, Dylan, in 1992) seen playing the clarinet. Bug-eyed and larger than life, the image of Depardieu (who is under investigation in Paris in a case of alleged rape and sexual assault) appears at the forefront of the painting, only a few inches below a rendering of Sharon Stone, depicted with ample cleavage.

In fairness, the mural was drawn before Depardieu was accused of rape by an unidentified French actress in 2018. And most of the subjects who are featured on the mural are well-respected, non-controversial icons. This list includes George Clooney, Marion Cotillard, Clint Eastwood, Elizabeth Taylor, Bruce Willis, Monica Belluci and Marilyn Monroe.

However, the face that gets the most real estate on the wall is that of Johnny Depp – lovingly drawn eating a pizza with a knife and fork. (Quelle horreur!)

The mural is something of a game for diners, who are meant to compete to see how many faces they can spot. But this year, visitors have noticed how awkward it’s been to gaze at a cartoon Depp, as his defamation trial against ex Amber Heard plays out in the United States.

As for the other two men? “It’s not a big deal, everyone knows who Depardieu is,” said one French La Pizza diner of the painting. 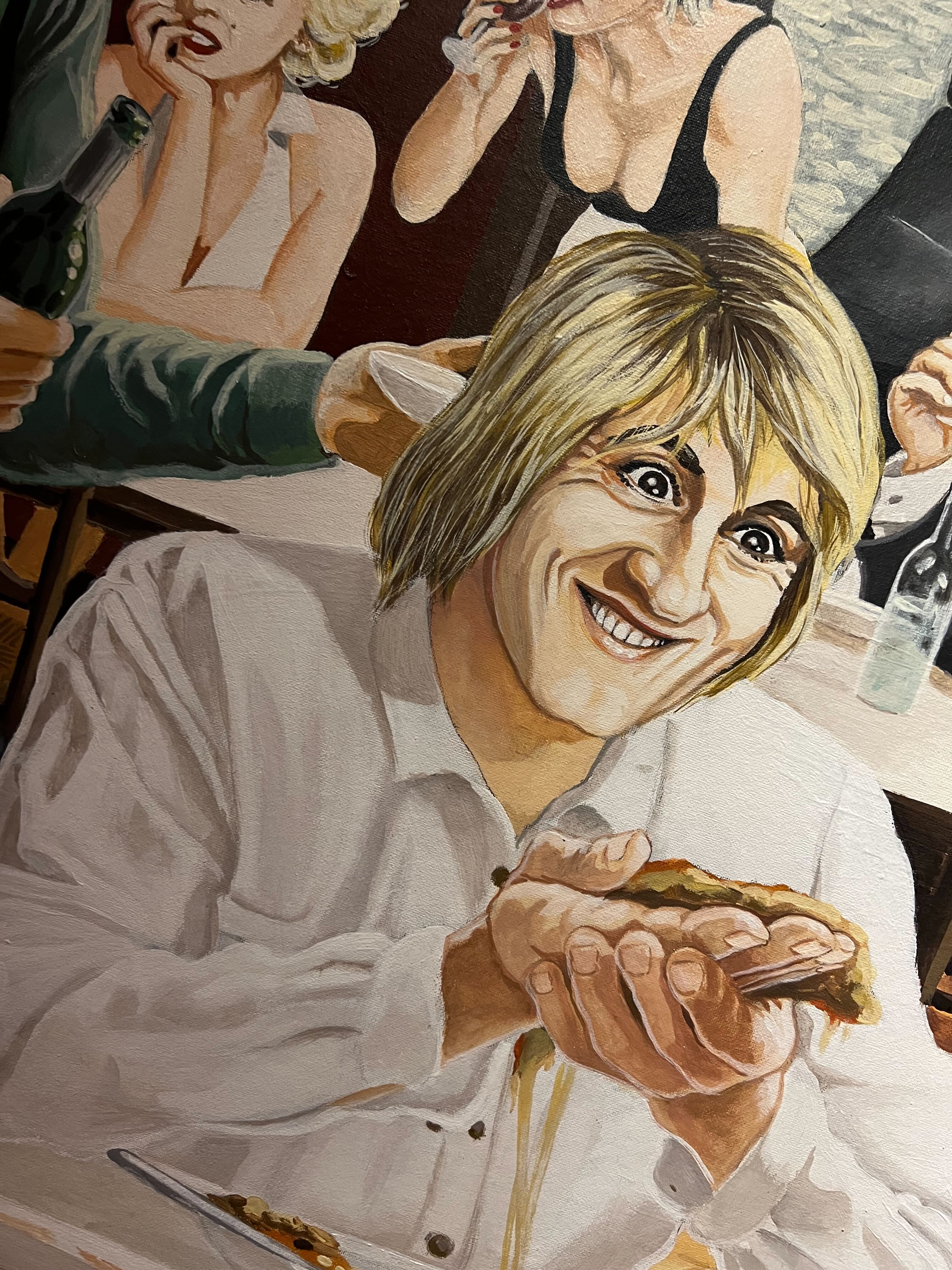 A manager on duty at La Pizza told Variety that Depp has never been to the Cannes restaurant, but Is said to have dined at a sister eatery in Nice. Furthermore, he added, there are several chairs in the restaurant which feature placards dedicated to famous former guests. One dedicated to Harvey Weinstein was removed after his downfall, said the manager, who declined to give his name. La Pizza’s owner would have to decide about amending Allen’s place in the mural, he added.

It’s unlikely that the owner would make the decision to erase either Allen, Depp or even Depardieu (accused of rape in France) from its mural as all three are still celebrated in France. Depardieu is still one of France’s biggest stars, and Depp was recently honored at the Deauville film festival in Normandie. He’s also the face of the perfume Dior Sauvage and stars in Maiwenn’s next big costume movie where he plays Louis XV. Allen, meanwhile, will have his next film “Rifkin’s Festival” opens on July 13 in French theaters. The “Annie Hall” director is rumored to be shooting his next film in Paris.

The La Pizza mural stands in conflict with recent changes trying to be implemented at the Cannes Film Festival, which has attempted to become more inclusive to women and people of color (although progress has been slow). Festival organizers are making efforts to catch up to the industry at large, which has attempted to implement sweeping changes in the era of #MeToo.

A painting isn’t the only sign that Cannes is still behind when it comes to cracking down on alleged abusers. Disgraced actor Kevin Spacey, who has been accused of sexual misconduct by multiple men, has two films seeking financing at the film market surrounding Cannes: the historical drama “1242 – Gateway To The West” and the dramatic thriller “Peter Five Eight.” There have also been murmurs that convicted rapist Roman Polanski’s new film could screen to prospective buyers at this year’s festival.

Depp — currently on trial in Virginia n a $50 million defamation case against his ex-wife Heard — lost a 2020 libel trial in the U.K. where Depp sued a tabloid for labeling him as a “wife beater.”

For now, at this popular pizzeria, he isn’t going anywhere.