Football, the American variety, is becoming a more global game by the day.

This week’s International NFL Combine in London is a clear showcase of that fact, and no participant captures the well-travelled status of the sport quite like Melbourne’s Tali Amosa.

A former Moorabin Rugby back-rower, the now-275-pound defensive end’s winding, 120,000km road to the combine was paved with setbacks and adversity, from academic challenges to personal struggles, and teenage decisions made far from home.

It saw Amosa log a travel book that looks more like it belongs to Cameron Crowe’s fame-chasing band Stillwater than a football hopeful chasing a shot at the NFL.

It’s the many stops of a global football citizen whose introduction to the sport came back in 2016 at the age of eighteen, in a gym in the south-east suburbs of his hometown.

“It’s funny, I was heading off to school in the morning and coach Dave [Tuinauvai] gave me a call and said I’ve got a coach coming in from Hawaii, would you like to come and see how it would be to get a training session with him?” Amosa tells ESPN.

“So I left school right after mum’s car left, and quickly went to the bus stop, straight to the gym and the coach was right there.”

“Dave told me to chuck the gloves on and we started sparring with the older boys,” Amosa said.

The coach was really interested; I guess he liked what he saw, and he said what do you think about playing football?”

As the session went on, the former flanker firmed the scouting interest by delivering a clear message about his physicality through an accidental black-eye.

“Me and Coach Dave were sparring and getting to it. Dave has a little weakness; he can’t lift his left shoulder or left arm, so he can’t block,” he says with a chuckle.

“I took advantage of that and gave him a nice little… and then whoopty-do.”

He was offered a scholarship to Hawaii on the spot.

Unfortunately, the Melbournian’s grades didn’t qualify for a four-year college in the U.S., so instead of the picturesque Pacific Ocean, his flight would head to Roswell and the New Mexico Military Institute, where the reality of the leap he was taking would hit, and hit quickly.

“That was a real culture shock,” Amosa said. “I got there and I had long hair at the time, a big ‘Fro. All off, right away. But it was awesome, an amazing experience. The education level was really up there.

“But the transition was really difficult for me, to be honest. I thought that it was going to be easy coming from a rugby background. Then coming to football, there was more of a technical side to it, attention to detail, all the little stuff that you never really think off.”

For Amosa, it wasn’t just a haircut and homework that provided hurdles. He explains how a difficult end to a relationship during his first year brought on mental health challenges, and the distance from home at a young age left him reaching for answers.

“It really hit me hard and I didn’t know how to handle it, I was so far away from home. It was really tough for me, so the best thing that I thought I could turn to was alcohol.”

“Mum and dad wanted me to come back home because they felt like something was wrong. I came back and all I did was [drink]. Within two months of being here, they started telling me maybe I should look into going back.”

Initially resistant, the teenage talent didn’t believe he was in the right state to hop back into the gym or onto a football field. But, as parents do, the message remained consistent and eventually broke through.

“They want the best for their kids. So, they kept pushing me to go back to [Conquest].”

“I went back to Dave and I was blessed to get another opportunity to head out to Garden City, Kansas.”

Amosa’s journey had been revived with a second chance, and he set off for America once again, now a Garden City Broncbuster. But the need to redshirt, and hurdles getting back onto the playing field stalled his momentum again.

“I was lost, I didn’t know what to do,” he says openly. “They still kept me on the school grounds, but I wasn’t on the team anymore.”

“That was the whole point of me going. My parents literally let me go because of football.”

“I’m lost, I’m young, and at that point I’m just like you know what, if I’m not on the football team I’m just going to go have fun,” Amosa confesses.

Unsurprisingly his focus dropped in class, and with it his grades. Come the end of the semester, the Australian defensive end wasn’t eligible to return to the Broncbusters’ football program.

“When I was on the football team they were providing me with board and food, but after that hit it was really tough.”

Normally filling out his frame at near 120kg (or 270 pounds), Amosa dropped down into the 80-90kg range, and moved in with one of the Garden State coaches. Once again without direction, it was here in West Kansas that an old sporting love reignited the flame for the increasingly-travelled football tourist.

“I went back to rugby. I played sevens and I was trying to reach out to people to get me into a 15-a-side squad because I couldn’t play football anymore.”

“If I didn’t jump into rugby [at that time], who knows what I’d be doing? I could’ve gone down the wrong tracks. So going back to rugby really saved me again, brought me back to reality.” 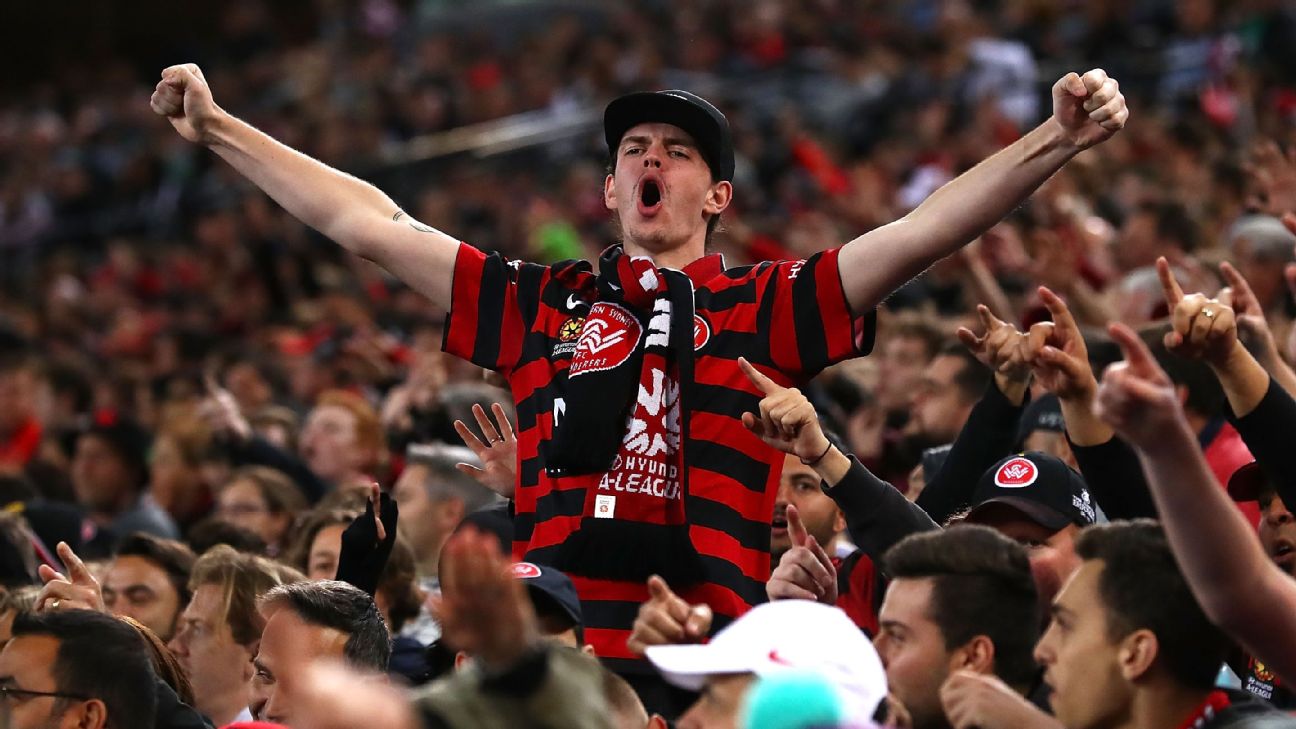 Australian users can personalise their ESPN experience by downloading the app. Get live scores, news and videos for the teams and sports you love ANYWHERE, ANYTIME.

A slice of home had reignited his athletic pursuit, and now a phone call from an old training partner would set the new bearing.

Fellow Conquest Athletic Performance alumni Ben Key, now on the defensive line at East Los Angeles College for the 2018-19 season, was on the other end of the line.

“Hey Uce, do you still want to play?” Key asked.

“Play what?” Amosa snapped back.

“Do you still want to play football?”

“Talk to the coach.”

The coach grabbing the phone was East Los Angeles Head Coach Bobby Godinez, who simply asked if Amosa was in.

“He told me to fly in… the rest is history.”

Having faced personal hardships, mental health challenges and the weight of his own decisions, Amosa was more than appreciative of the support network he found in his third football home.

“Out there in East LA, having Ben there was just amazing, to have someone else from the same place I come from, he’s like my brother.”

However, there was one notable issue upon arriving in Monterey Park, California.

“I arrived and they were expecting me to 110-120kg, because Ben was telling them I was a big boy.”

“Coach Godinez looks at me and said, ‘He’s really skinny, how are we going to put him on the defensive line?'”

A simple problem with an elegant solution; a strong health program, the weight room, and local cuisine.

“In L.A. they have some nice food. My go to was burritos.”

Healthy, thriving and back at playing weight, Amosa racked up 8.5 tackles for loss and four sacks in his eight games in East Los Angeles, before another opportunity came knocking in 2019.

“I was blessed and fortunate enough to get a full scholarship to Texas A&M Commerce. That was something,” he shares with a huge smile.

“The players they had, the coaching staff, it was amazing. They were really running for a Division II championship. Everyone was of the same mindset, all willing to put in the work to take it out, and I learned a lot.”

“Even thought it was a D2 school, for me as a kid from Australia we don’t see that. The atmosphere of the stadium, how big they are… I was like ‘Sheesh, is this a normal thing? I can’t imagine what it’s like at a D1 school.'”

While the COVID-19 pandemic would bring his time in Texas to a close, a chance to play for the Berlin Rebels this past year has reaffirmed just how far Amosa’s adopted sport can take him, with eyes firmly set on London next.

“It’s surreal to be honest… I’ve been bouncing around quite a bit from when I started, now it’s come to this point where everything’s slowly working out how It was supposed to.”

The 24-year-old is determined to show NFL scouts that he’s a “student of the game”, and that his drive has only matured over an unorthodox pathway in the sport.

“I’m doing this for me, because if I don’t do it for myself then there’s no point in me doing it,” Amosa states.

“But I’ve seen my parents wake up early mornings, going to factory work, finishing late and coming back home tired. Doing the same thing each and every day. So I’m just trying to have my parents rest. They’ve done so much for me and my older brother, so it’s time for them to hang the boots up and enjoy life.”

“I’m confident in what I have to offer, but I guess we’re going to have to wait and see.”