Why the Pro Bowl means so much to first-timers like...

Los Angeles Chargers quarterback Justin Herbert was in the locker room when safety Derwin James broke the news to him.

Herbert was going to his first Pro Bowl.

“Is it official?” Herbert asked James in late December.

It was not only official. It was historic. Herbert became the first Chargers quarterback to be selected as a Pro Bowl starter since fellow-Oregon alum Dan Fouts in 1983, a span of 38 years.

“I was always a big Dan Fouts fan, so that’s really cool to hear,” Herbert told reporters. “We’ll text from time to time. Just a great guy, and I got to learn a bunch from him.”

Herbert is among the first-time selections to this year’s Pro Bowl, which will be held Sunday in Las Vegas (3 p.m. ET, ESPN). The players were selected by a combination of fans, players and coaches.

Quickly ascending to one of the top passers in the league, Herbert set an NFL record for the most touchdown passes in his first two seasons in the NFL with 69. He also became the ninth quarterback to throw for 5,000 yards in a season.

The No. 6 overall pick in the 2020 draft, Herbert said he never thought about beating out some of the top quarterbacks in the league to become the AFC’s Pro Bowl starter.

“My priorities at that time was wherever I go to understand the offense, to learn that and get timing with the receivers, and whatever happens happens after that,” Herbert said. “All I could control was my effort and my attitude and good things will happen if you put in the work. It’s kind of funny how things have worked out the past couple of years, but I wouldn’t change a thing.”

Herbert returns to Allegiant Stadium, where his playoff hopes ended in a 35-32 overtime loss to the Raiders on Jan. 10.

While some players, especially those who have been selected to multiple Pro Bowls, might take the game more casually, or even opt not to play, many of the first-timers consider it an honor and the realization of a career goal to be heading to Las Vegas. These are some of their stories.

Maxx Crosby’s first invitation to the Pro Bowl brought tears of joy and a feeling of redemption for how he has turned his life around.

“I was in rehab like two years ago, and now I’m in a Pro Bowl,” Crosby told reporters.

“I was in rehab almost two years ago and now I’m in the Pro Bowl…I cried like a baby.” – an emotional #Raiders DE Maxx Crosby pic.twitter.com/4a2YQizC9x

Crosby, a defensive end for the Las Vegas Raiders, spent a month in rehab for alcoholism in the spring of 2020 and has been 22 months sober. He said alcoholism runs in his family and acknowledged his drinking made his life “unmanageable” after his rookie year.

Last season, Crosby became one of the most consistent pass-rushers in the league, producing the third-most quarterback pressures since 2006 with 100, according to Pro Football Focus. Now, the fourth-round pick is in the Pro Bowl after 25 sacks in three seasons.

“That s— just hit home. It’s special,” he said. “Makes my family proud, my girls. Everybody around me is calling, just blowing up my phone.

“I’m crying like a baby because I know I’ve worked so hard. It’s starting to pay off.”

@CrosbyMaxx THIS GUY!! Y’all have no idea what he’s been through and the grind he has!! People say no days off………… THIS GUY LIVES IT!! Proud of my brother man!! Can’t think of a more deserving person!! Congrats brotha!! Blessings to many more!! Just the beginning!!

Crosby is one of four Raiders who will be playing at their home stadium, joining punter AJ Cole, middle linebacker Denzel Perryman and wide receiver Hunter Renfrow.

Could Trevon Diggs line up across from his brother Stefon in his first Pro Bowl?

Trevon Diggs, a cornerback for the Dallas Cowboys, led the NFL in interceptions with 11 in his second season. His older brother, Stefon, is a wide receiver for the Buffalo Bills and finished eighth in the NFL with 1,225 yards receiving.

About 15 family and friends celebrated the Pro Bowl announcement on FaceTime.

“[Both of us making the Pro Bowl is] probably one of my favorite moments of this year, for real, because that’s my brother,” Trevon told ESPN recently. “I love him to death and just being able to go up there with him, that’s fire.”

Trevon and Stefon are the third set of brothers at this year’s Pro Bowl. The others are Chiefs tight end Travis Kelce and Eagles center Jason Kelce along with the pass-rushing Bosa brothers (the Chargers’ Joey and the 49ers’ Nick).

“I was just more proud than anything,” Stefon said. “I was more happy when I heard about him [making the Pro Bowl], because I knew he was going, but I still wanted to see it. I saw his picture and I saw his face, I saw him in the Cowboys [jersey], I’m like, ‘Yeah, that’s my little brother.”‘

The All-Pro returner was traded to the Chicago Bears in Week 5, two days after he muffed a punt for the Miami Dolphins. The Bears sent a sixth-round pick to the Dolphins for the motivated Grant.

“My goal was to go out and prove guys wrong and show [Miami] they made a big mistake in trading me,” said Grant, who spent more than five seasons in Miami. “I just wanted to show them that and show Chicago that they have something special.”

Grant averaged 13.9 yards per punt return — nearly double his average in four games with the Dolphins (7.4) — and he returned a 97-yard punt for a touchdown against the Green Bay Packers in Week 14. That was the longest punt return in Bears history and the ninth-longest ever in the NFL.

“Getting that recognition from around the league as a return man, it’s pretty special,” Grant told ESPN. “For thousands of fans that want me to go, its amazing. I didn’t think people paid attention to me like that. They think of the Odell Beckhams of the world. Paying attention to me made me feel special and also creates a bigger hunger.”

Will Grant return a punt for a touchdown in the Pro Bowl?

New England Patriots cornerback J.C. Jackson didn’t hear his name called during the 2018 draft, watching 29 cornerbacks get selected that year. In a matter of four seasons, Jackson has gone from receiving a $10,000 signing bonus to reaching his first Pro Bowl.

“That’s been my goal since I entered the NFL,” Jackson told reporters. “I want to meet all the goals, the Hall of Fame, the Pro Bowl, All-Pro. That’s what you play for, you play to be the best, you play to compete.”

Jackson has backed up his “Mr. Int” moniker on social media by picking off 17 passes over the past two seasons. This past season, he led the NFL with 23 passes defended. Some thought he should have made it last season when he had nine interceptions, two fumble recoveries and 14 passes defended.

“I came in undrafted, so I had to put in more work than anybody,” Jackson said. “I want to thank the team for taking a chance on me. I always knew I could be one of the best DBs in the game, it was actually putting the work in and doing what I need to do to be the best.”

Browns’ Wyatt Teller: No sugarcoating it

The first trip to the Pro Bowl for Cleveland Browns guard Wyatt Teller featured a winding path. He was drafted in the fifth round by the Buffalo Bills in 2018, traded to the Browns a year later and then placed in a battle for the starting right guard spot in 2020.

Teller has since become one of the top interior linemen in the league, and he didn’t hide his excitement for being recognized for it.

Teller finished this season as the fifth-highest-graded guard in the NFL, according to Pro Football Focus.

“Every kid, when you’re writing down ‘I want to be a pro football player,’ your mindset is being one of the big names, being one of the guys who wins in the playoffs, gets championships but also is the best at the position,” Teller said. “You might not say you want to be a Pro Bowler, but once you start growing up, that’s the goal.”

Devin Duvernay never thought he would make his first Pro Bowl as a punt returner. He had never returned kicks before doing so for the Baltimore Ravens.

In 2020, Duvernay was drafted in the third round after catching 106 passes at Texas. But late in his rookie season, the Ravens approached him about helping out as a punt returner.

Duvernay instantly clicked in his new role, leading the NFL this season with a 13.8-yard average on punt returns. 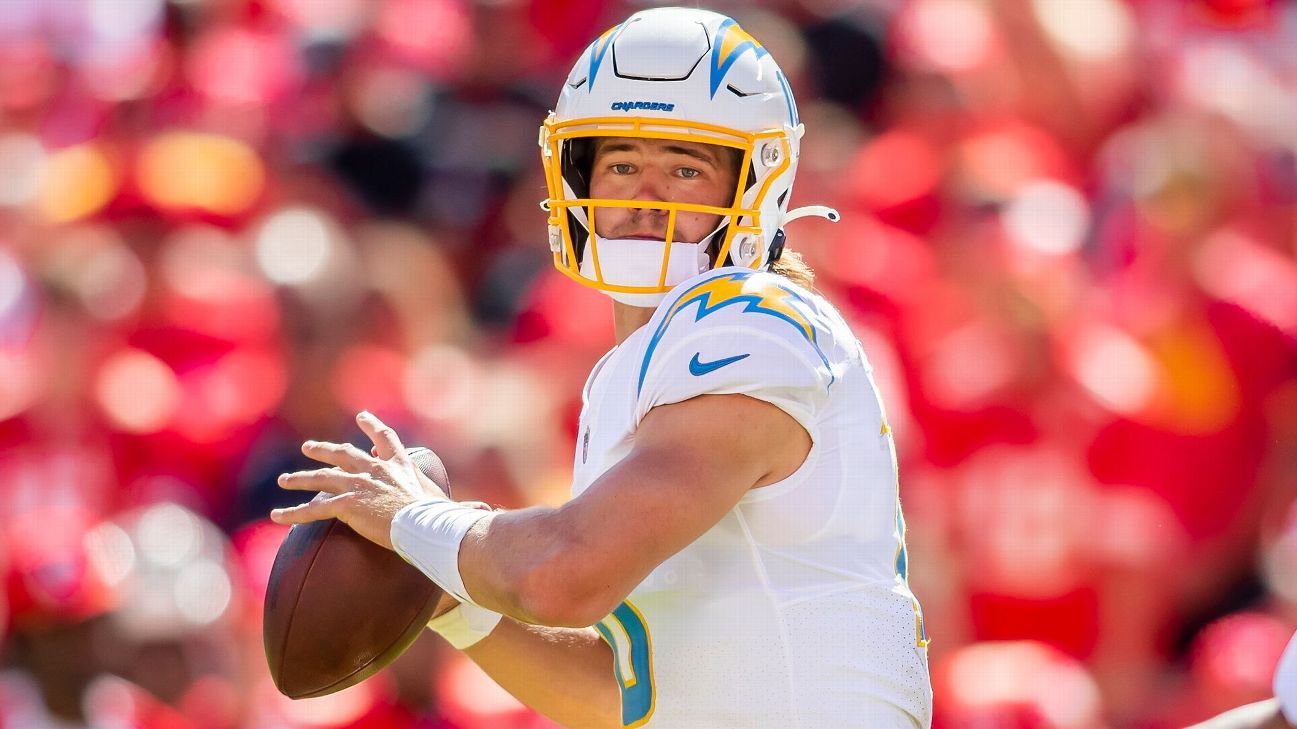 “When I first started, I felt like I could be pretty good at it, just being an athlete and just catching the ball and trying to make the most happen,” Duvernay said. “I feel like I would fit in perfectly when they came to me with it.”

Still, Duvernay was shocked when Ravens general manager Eric DeCosta informed him that he was going to the Pro Bowl.

“I didn’t know what to say. I was at a loss for words,” Duvernay said. “It’s not that I didn’t think I could do it. It just wasn’t on my mind. And to be named to it was like a dream come true.”