Slate’s ‘Slow Burn’ is the winner of Apple’s first podcast...

Apple debuted its first podcast award today with Slate’s “Slow Burn” as a winner for this year. The company said that the award is to celebrate the “outstanding quality, innovation, and impact” of the show.

“Slow Burn” first launched in 2017, and its latest season about Roe v. Wade was released on June 1, 2022 — a month after the draft decision of the reversal leaked. The season, hosted by Slate executive editor Susan Matthews had four episodes that discuss historical events leading up to the 1973 decision by the Supreme Court ruled that constitution grants a right to abortion.

Apple said that “Slow Burn” is one of the all-time popular podcasts on the platform clocking more than 100 million downloads. While the show is free, Slate offers bonus content from its catalog through its Slate Plus subscription available for $9.99 per month. The company is also offering a $99.99 per year annual subscription for a limited time. 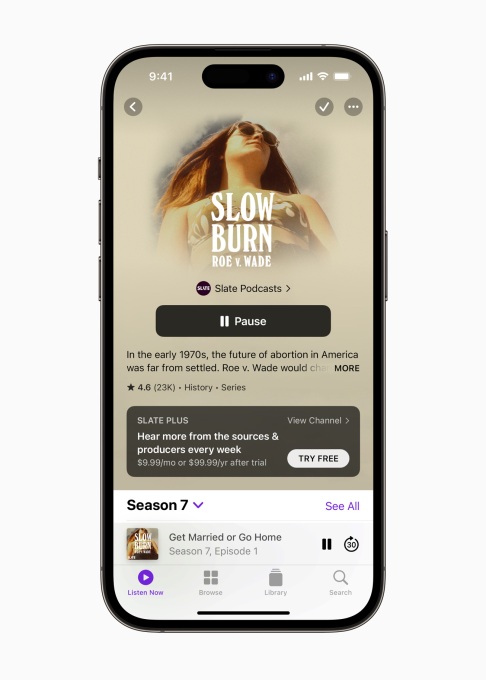 The company said that the showmakers are releasing six “Slow Burn” extra episodes for free that contain personal stories and extended follow-up interviews with people featured in the series.

The Cupertino-based tech giant said that next month, its editors from 100 countries will publish a podcast list called “shows we loved” along with year-end charts for popular podcasts.