Anthony Bourdain final texts before death revealed: ‘I hate being...

Anthony Bourdain struggled with fame and heartbreak in the days leading up to his death by suicide, a new book reveals.

In an unauthorized biography titled “Down and Out in Paradise: The Life of Anthony Bourdain,” journalist Charles Leerhsen includes text messages sent by the late celebrity chef in his final days to gave insight into his mindset.

“I hate my fans, too. I hate being famous. I hate my job,” Bourdain wrote to his ex-wife Ottavia Busia-Bourdain, who had become one of his close confidants, per an excerpt published by the New York Times. “I am lonely and living in constant uncertainty.”

Leerhsen also notes in the book, due out Oct. 11, that Bourdain and his then-girlfriend of two years, Asia Argento, often had fits of jealousy.

Five days before he died in June 2018, the CNN host saw photos of Argento, 47, dancing with French reporter Hugo Clément in a Roman restaurant the couple would frequent together.

According to the book, Bourdain was “incensed” over the images and searched the “Land of the Dead” star’s name online “hundreds of times,” causing them to argue over the phone and via text.

“I am okay. I am not spiteful. I am not jealous that you have been with another man. I do not own you. You are free. As I said. As I promised. As I truly meant,” the “Parts Unknown” star reportedly texted Argento a day before his death.

“But you were careless. You were reckless with my heart. My life.”

Bourdain noted in the same conversation that he was most hurt by the fact that the Italian actress’ alleged tryst took place at a hotel in Rome that they loved.

Argento then reportedly wrote back to him, “I can’t take this.”

A day later — after a full day of filming followed by a night of drinking — the beloved chef reached out to Argento once more.

“Is there anything I can do?” he reportedly asked, to which his ex replied, “Stop busting my balls.”

Bourdain, according to the book, simply wrote back, “OK” and then hanged himself.

Bourdain and Asia Argento dated for about two years. 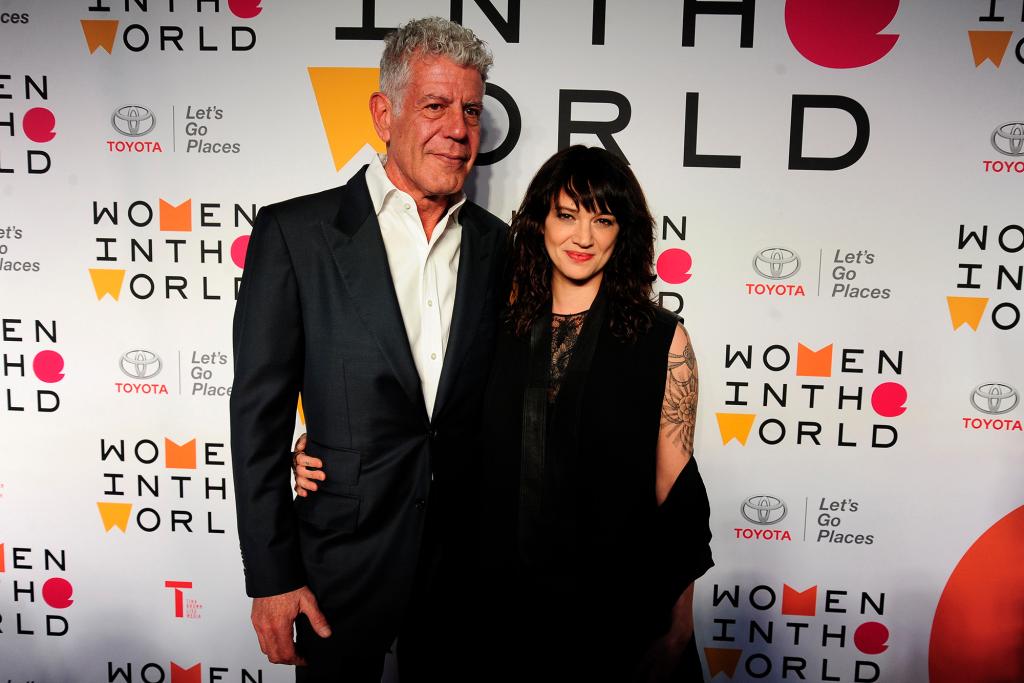 Bourdain and Asia Argento dated for about two years.

The New York Times reached out to Argento for comment, and she told the newspaper that she had not read the book but said of Leerhsen, “I wrote clearly to this man that he could not publish anything I said to him.”

Argento has said in the past that her infidelity was not to blame for Bourdain’s death.

“People say I murdered him. They say I killed him. I understand that the world needs to find a reason. I would like to find a reason too,” she said on “DailyMailTV” in September 2018. “People need to think that he killed himself for something like this. He cheated on me, too. It wasn’t a problem for us.”

She added, “He was a man who traveled 265 days a year. When we saw each other, we took really great pleasure in each other’s presence, but we are not children. We are grown-ups.”

If you or someone you know is affected by any of the issues raised in this story, call the National Suicide Prevention Lifeline at 800-273-TALK (8255) or text Crisis Text Line at 741741.