Reese Witherspoon would be proud.

Kate Middleton made her first solo appearance during the Waleses’ three-day royal tour of Boston Friday, stopping at Harvard University in a sleek and sophisticated houndstooth outfit.

The Princess of Wales, 40, arrived at The Center of the Developing Child in a long-sleeved version of the “Miles” dress ($1,525) by one of Middleton’s favorite English designers, Emilia Wickstead.

She paired the bold blue look with a petite Mulberry purse, black pumps and gold hoop earrings by Lenique Louis.

The princess met with researchers to discuss advances in science that can benefit children, as Middleton launched The Royal Foundation Centre for Early Childhood last year.

While she channeled her inner Elle Woods at Harvard, husband Prince William visited the John F. Kennedy Presidential Library and Museum, where he met with the late president’s daughter, Caroline Kennedy — who is currently serving as the US Ambassador to Australia — as well as her husband, Edwin Schlossberg, and two of their three children: Jack and Tatiana.

The Princess of Wales signed the official Harvard University guest book and met with researchers at The Center on the Developing Child. 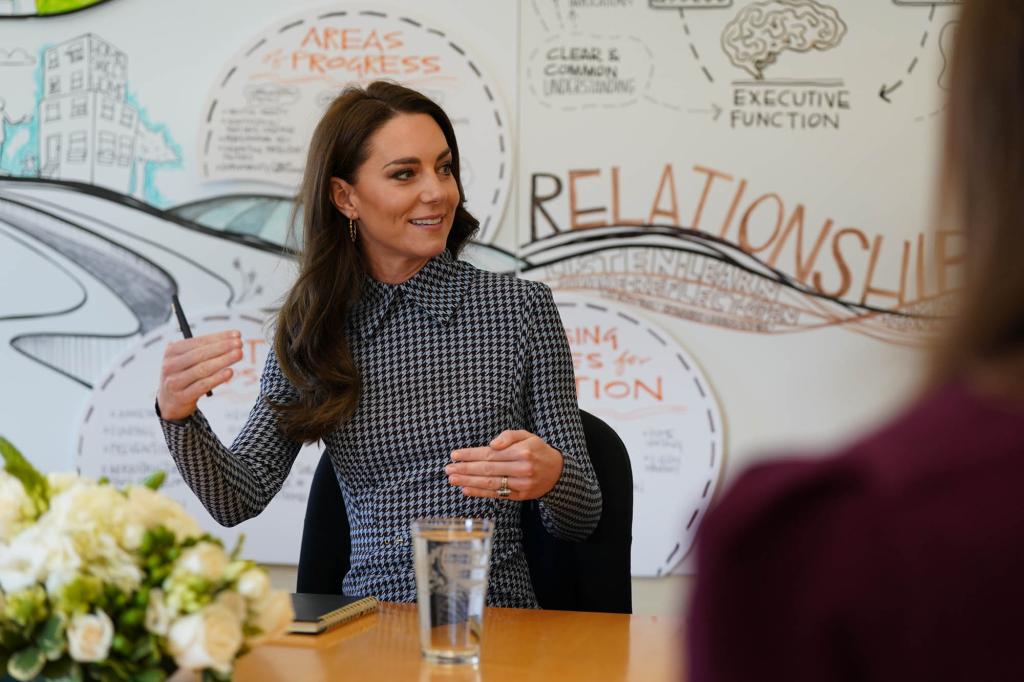 The Princess of Wales signed the official Harvard University guest book and met with researchers at The Center on the Developing Child.

“I just want this one to keep going and going…

Later today, the Prince of Wales, 40, will host President Joe Biden at the library before he reunites with Middleton for the glitzy Earthshot Prize Awards tonight.

The sustainability-focused gala is the culmination of the royal couple’s visit to the US, with performers including Billie Eilish, Ellie Goulding, Annie Lennox and Chloe x Halle.

Wills and Kate may re-wear something previously seen on the green carpet as a nod to the event’s environmentally friendly nature. The mom of three has put on a fashion show during her short trip, trotting out multiple designer outfits in one day and even matching her husband in burgundy on Thursday.

Whatever the case, she’s sure to make a splash with a glamorous final look tonight.