Matthew Perry: Why the ‘Friends’ cast won’t ‘care’ to read...

Matthew Perry doesn’t think his former “Friends” co-stars will be interested in reading his new memoir about his decades-long battle with addiction.

Perry, 53, told GQ in an interview published Thursday that as of now, none of his co-stars besides Lisa Kudrow, who wrote the foreword, have read “Friends, Lovers and the Big Terrible Thing” — and he doesn’t expect that to change.

Kudrow, 59, shares in her opening of the book, which hits stores Nov. 1, that reading Perry’s story was the “first time [she heard] what living with and surviving his addiction really was.”

“Matthew has told me some things, but not in this kind of detail. He’s now letting us into Matthew’s head and heart in honest and very exposed detail,” she writes in part.

Despite Perry’s belief that his other castmates — Jennifer Aniston, Courteney Cox, David Schwimmer and Matt LeBlanc — won’t give his book a read, that didn’t stop him from writing about them and sharing some juicy details about his time on the NBC sitcom.

Perry reveals that he had a massive crush on Aniston, 53, when he met her prior to being cast on the show, and he was “immediately taken” by her. She ended up rejecting him after he asked her out, but that didn’t totally stop his crush.

“Fairly early in the making of ‘Friends’ I realized that I was still crushing badly on Jennifer Aniston. Our hellos and goodbyes became awkward. And then I’d ask myself, how long can I look at her? Is three seconds too long?” he writes.

Aniston would later become the cast member who confronted Perry about his addiction at the height of his career.

Perry writes that Aniston came up to him one day and said, “I know you’re drinking.” After he asked how she knew, she replied, “We can smell it.”

“The plural ‘we’ hit me like a sledgehammer,” Perry recalls, adding that the confrontation was “devastating” to him.

The “Whole Nine Yards” actor also divulges that he was “driven back to [a] treatment center … in a pickup truck helmed by a sober technician” after filming one of the show’s most iconic scenes: when his character, Chandler Bing, married Cox’s, Monica Geller.

The actor details his battle with alcohol and drug abuse during the height of his career. 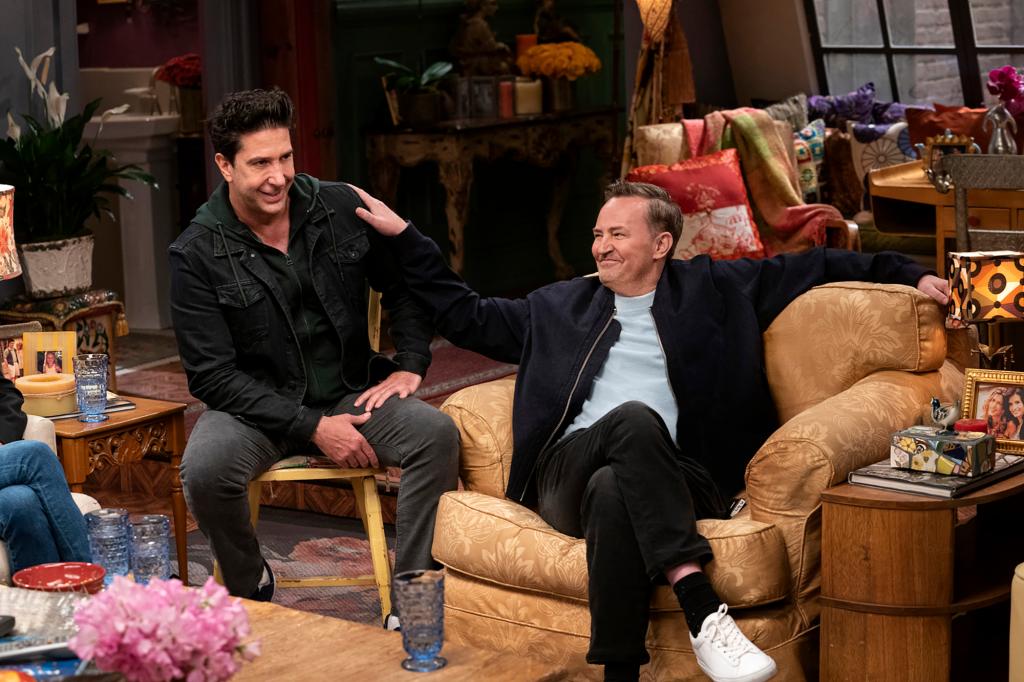 The actor details his battle with alcohol and drug abuse during the height of his career.

“What a crock of s–t,” the “Kardashians” star recalled thinking…

Perry ended up going to rehab twice during the sitcom’s run from 1994 to 2004 and estimates he has spent around $9 million fighting his addiction over the years.

The actor “nearly died” a few years ago when his colon burst and doctors told him he had a “2 percent” chance of survival. He is now 18 months sober.