Thanks to a wild, trade-happy first round of the 2022 NFL draft, the first three picks of the second round have changed hands. As of now, the Buccaneers, Vikings and Titans will kick off Day 2, giving them first dibs on some very talented prospects still on the board.

Perhaps the biggest name still available is Liberty quarterback Malik Willis. Round 1 saw only one QB get drafted (Kenny Pickett), so we could see a run on signal-callers in the second round. And despite six receivers finding new homes on Thursday, look for a few more to join franchises in Round 2. The first round didn’t have a single running back or tight end, so perhaps we could see a few on Day 2? And what about top prospects such as Georgia linebacker Nakobe Dean, Penn State edge rusher Arnold Ebiketie and Clemson cornerback Andrew Booth Jr.? How quickly will they be drafted on Friday night?

Here’s my prediction of how Round 2 will play out, with a number of potential Day 1 starters still available. It’s full of unpredictability, so this is a projection of what could happen if every team drafts based purely on fit and need. We begin with Tampa Bay, which traded out of its first-round selection and now gets things going on Day 2.

A guard would be ideal here, but the value isn’t there, so I wouldn’t be surprised to see the Buccaneers trade back again.

If they do make this pick, Hall is an intriguing option. Leonard Fournette re-signed, but Ronald Jones II is gone and the Buccaneers’ finished 26th in rushing yards per game last season. They could use the depth.

The Vikings did well to get safety Lewis Cine in Round 1 after trading back, and they should continue to address the secondary with cornerback Patrick Peterson turning 32 this year and having signed to only a one-year deal.

Ryan Tannehill is 33 years old, and the Titans could get his heir apparent in Willis without asking him to do much early in his career, allowing him to develop.

Louis Riddick discusses if the Steelers will regret taking Kenny Pickett over Malik Willis in the first round.

The Kenny Golladay free-agent signing didn’t pan out for the Giants last season, and Sterling Shepard and Kadarius Toney both missed substantial time. This pick would give them more options as Watson has the potential to develop into a No. 1 receiver.

The Texans released Whitney Mercilus in October of last year, and Jacob Martin signed with the Jets in free agency. Ebiketie is the 34th-ranked player on our board and would be a good get here for the Texans.

Dean is too good for the Jets to pass up here. He is an instinctive pass-rusher who locates and exploits gaps in pass protections. He should push Quincy Williams for the starting role opposite C.J. Mosley.

Akiem Hicks, 32, is a free agent, and the Bears released Eddie Goldman. Adding Jones would be ideal. He has the strength and size to bolster a run defense that finished 23rd in rushing yards allowed per game last season.

The Seahawks cut Carlos Dunlap II and need to get more out of their pass rush. Adding Mafe to complement Darrell Taylor would give them two young and talented edge rushers.

Seattle doesn’t have to go far to add another defender capable of helping it improve a pass defense that ranked 31st in the league last season. Gordon should push for a starting role in camp and make an immediate impact on special teams — making him an excellent value at this point in the draft.

Michael Pittman Jr. is coming off 1,000 receiving yards last season, but the Colts need a No. 2 receiver. Moore separates well and is a threat after the catch who has top-end speed to challenge vertically. 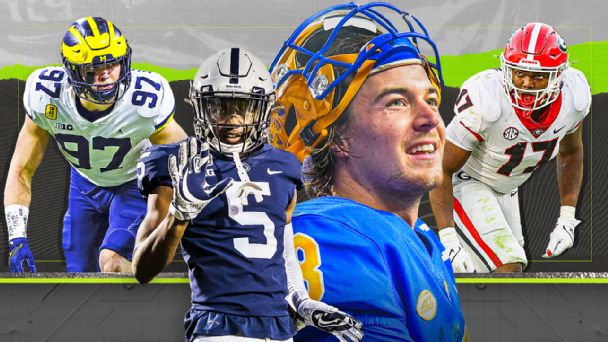 The Falcons signed Marcus Mariota to a two-year deal after trading away Matt Ryan, but he is no lock to be the long-term answer. Ridder could back Mariota up for a year and then compete for the starting job.

The Browns address one of their most pressing needs with their first pick of the 2022 draft. Winfrey is a disruptive run-stopper with some upside as a pass-rusher.

Calais Campbell signed a two-year deal but turns 36 this year, and 32-year-old Derek Wolfe missed all of last season for the Ravens. Hall can set the edge when he lines up on the outside and is effective when kicking inside to rush the passer.

Jared Goff doesn’t appear to be a long-term answer in Detroit. And while Corral will need some time to adjust to the NFL game, he has an intriguing skill set.

We have a third-round grade on Woolen, but I’m a little higher on him. He has the tools to push for a starting job early in his career, and cornerback is a top-three need for the Commanders.

The Bears need to surround second-year quarterback Justin Fields with options. Pickens is a deep threat with the speed to stretch the field and run under Fields’ deep ball.

Mathis is a tough run-stopper who made strides as a pass-rusher last season at Alabama, and he could push for the starting role opposite David Onyemata.

The Chiefs should add to their offensive line here. They placed the franchise tag on left tackle Orlando Brown Jr. and right tackle Lucas Niang has shown good flashes, but the Chiefs might not sign Brown to a long-term deal and Niang tore his patellar tendon late in the 2021 season. Raimann could add depth to the roster.

The Eagles will address a need at cornerback with McCreary, who provides great value. He is capable of competing for the starting spot opposite Darius Slay in training camp.

Matthew Berry gives his opinion of the Philadelphia Eagles trading for A.J. Brown.

Matthew Berry makes fantasy sense of the receiving shakeups in Philadelphia and Tennessee following the trade of AJ Brown to the Eagles. Video by Pierre Becquey

Ojabo is available here only because he tore his Achilles at his pro day — and I wouldn’t be surprised to see him come off the board earlier. But this selection makes perfect sense in terms of value and fit if he does fall this far.

The Packers finally select a wide receiver here. After all, they need to replace the production they will miss after trading Davante Adams to the Raiders this offseason. Metchie is a polished route runner who flashes after the catch and is capable of quickly developing into a productive slot receiver.

Taylor-Britt is a versatile defensive back with outstanding top-end speed. He should compete for a starting corner job early in New England and make immediate contributions on special teams.

The Cardinals lost Chandler Jones to the Raiders in free agency, and they need to get younger at outside linebacker. Jackson is a good fit for the scheme and could push for a starting job in camp.

A defensive end makes sense here as Randy Gregory signed with Denver in free agency and 30-year-old DeMarcus Lawrence missed nine games last season, exposing a need at the position. Paschal is versatile enough to kick inside when the Cowboys bring Micah Parsons off the edge.

The Bills have a number of serviceable backs, but Walker is the best pure runner in this class. Buffalo doesn’t have a lot of holes on the roster, so it can take the best available player — and that happens to be Walker.

The Falcons struggled to keep then-quarterback Matt Ryan upright last season. Right tackle Kaleb McGary wasn’t the only problem, but he did struggle in pass protection. Lucas represents a potential upgrade at the position and added help for Mariota.

Petit-Frere grades out as a No. 3 swing tackle who can provide depth at both tackle spots and has the potential to develop into a starter. Plus, Elgton Jenkins (when recovered from a torn ACL) is versatile and can kick inside to guard if Petit-Frere emerges as a starter. 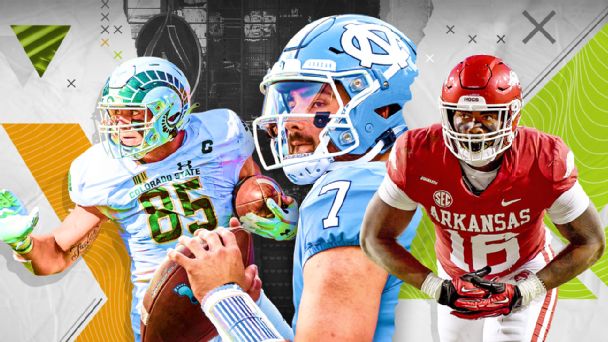 Goedeke is a tackle who projects best at guard, and he could push for a starting job as a rookie. It won’t be easy replacing Ali Marpet, who retired after last season, but adding Goedeke would help soften the blow.

Jalen Pitre is higher on our board and one of my favorite players in this draft, but we have a second-round grade on Brisker and he is a better fit at safety for the 49ers.

Pitre is at his best playing close to the line of scrimmage, and the Chiefs can take advantage by playing him over the slot. Adding Trent McDuffie in the first and Pitre in the second should help improve a pass defense that ranked 27th in passing yards allowed per game last season.

Ideally the Bengals bring in a linebacker capable of pushing Germaine Pratt for the starting spot opposite Logan Wilson. Harris is a sideline-to-sideline run-defender who can hold up on third down.

Tight end Albert Okwuegbunam is talented and took a step forward last season, but Noah Fant was a part of the Russell Wilson trade. McBride is the top tight end in this class and would be a good get for the Broncos.